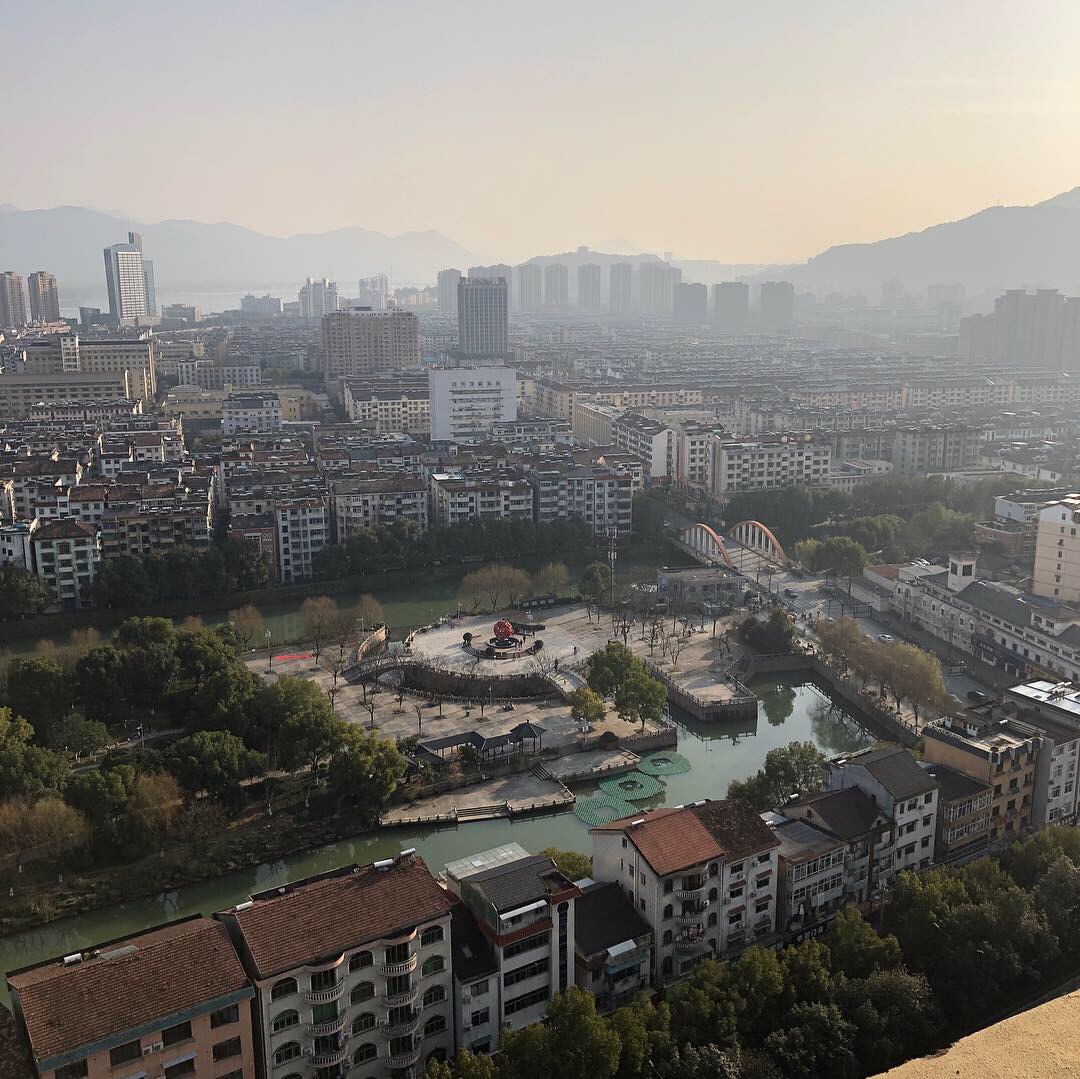 I recently completed my almost five weeks off of work for the Chinese Spring Festival, and I have an interesting array of things to show for it. Thankfully, they were somewhat placed in phases, so here goes! 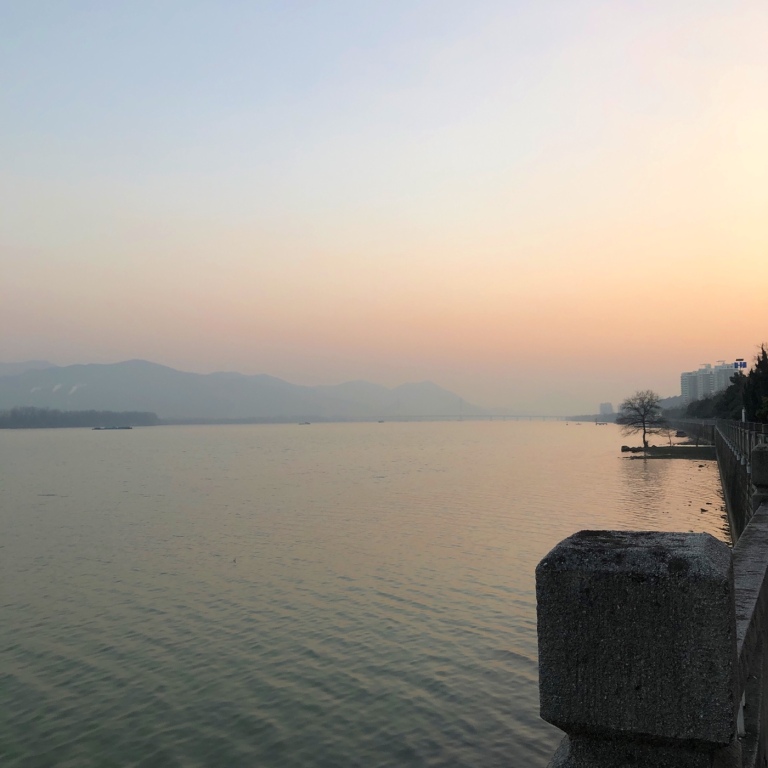 The first two weeks were the most productive. I worked out several times, took a few long walks, paid off my first credit card, and put my first thousand into savings (yay!). I also read a half dozen books, worked rather intensely on my Chinese, and wrote drafts of several blog entries, as well as my monthly column for a whiskey e-magazine to which I contribute. I was going to bed and getting up at normal times, too–I kept my curtains open, so I didn’t have much of a way to stay asleep once the sun rose. 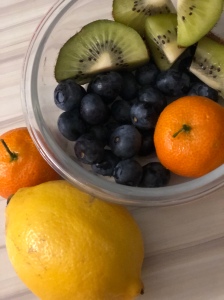 I participated in more podcasts about bourbon and enjoyed talking, messaging and FaceTiming with friends and family back home. We had some sunny days that second week, too, after a string of rainy days. It snowed a little once.

Around the time of the Chinese New Year, something shifted. I got into one of my “reading benders” after staying up until midnight anyways, and a free week of Showtime sucked me into some TV show binging that I can’t say was entirely healthy for my mindset. But the most impactful has been several weeks of cold rain and nearly relentless fog since February 4 (the Chinese New Year) that has kept me inside. 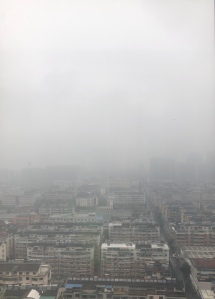 I’ve always thought that I would enjoy staying in one place for awhile, without work, as a kind of voluntary hermit. And the days when we had even a bit of sun, I really did! The walks were lovely, and I also enjoyed the rain at night. When the whole world was quiet and I sat reading, which happened consistently throughout the “staycation,” everything felt beautiful and still. The sound of rain on the sunroof of our building (it’s hard to explain, but there’s basically a huge glass pane that covers the area in the center, and the apartments are all arranged around the edge) sounded more comforting and heavenly than anything I’ve experienced here. I loved these nights, when I would stay up until 2, 3 or 4 am reading, listening to the soft rhythm of the rain on the roof.

But as the rain progressed, I stopped waking up early. It was dark enough at 8 am to feel like late afternoon, and then I had a migraine once, so I slept most of the day. Days bled into weeks, and I stopped being as active. I didn’t get the slew of writing done that I’d imagined, nor did I write out all of the lesson plans for the rest of the year. I also ordered more drink and food than my budget had allotted, and even spent–gasp!–ABOUT $15 on a sweater and a tiny speaker!

So was it worth it to stay home instead of going somewhere nearby? And is it wrong that I didn’t even make it to neighboring Shanghai or Hangzhou?

I’ve excerpted, besides the rain, some very positive things that were accomplished. I’ve said before that I’m usually good at one thing at a time, and it remained largely true. Thankfully, with an entire day of time, I even managed to get TWO main things done: cooking daily, and getting organized/clarifying my future plans. 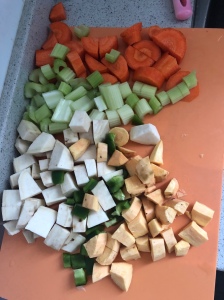 My days fell into an easy routine, because even if you wake up late, you gotta eat. While I can have a few American foods delivered quickly, I exhausted my love of the one item I like at KFC (a chicken wrap) last fall, and with the cooking I’ve been doing, McDonald’s ceased to be compelling. I still had a few slip-ups, like when I discovered that there IS a place that does mediocre/edible sushi in Fuyang (which I hadn’t known before a search for “lemon” somehow brought up “shousi,” sushi), or ordered enough Chinese food for a late-night noodle craving to last a week (it’s never good when they deliver your meal with five sets of chopsticks!). By and large, however, I spent hours a day chopping up vegetables and cooking good, whole foods for myself, every day, for the first time in my life.

It was amazing, y’all.

Some stuff was simple, like tomato soup and grilled cheese and tuna salad (which probably made up a fourth of my meals). Some was more complex, like ginger carrot and sweet squash soup, or mac-and-cheese I made from scratch. And some was a total fail, like a few pasta sauces I made with less-than-stellar local tomatoes. But a lot of it was either really good, or good enough, like pad thai, ubon noodles with peanut sauce, and Thai red curry with brown rice. I also continued my tradition of loving breakfast food with an array of breakfast tacos, burritos and other dishes with scrambled eggs. It took a few months, but I’ve discovered a consistent supply of salsa and avocados after a friend gifted me his hot sauce and a huge supply of black beans, so that contributed to some yummy, Mexican-style breakfasts. 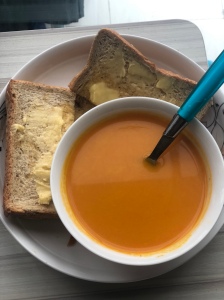 I’d started this habit before the break, but went full-throttle now. I generally cooked one meal and ate leftovers for the other, since I don’t usually eat when I first wake up. I listened to personal finance podcasts while I cooked, which made it an enjoyable activity that also taught me a few things. And, a bit to my surprise, I started to make cocktails to accompany the meals, because why not? I discovered an Eastern European brand of rum and gin as well as cheap (but decent quality) vodka and whiskey that provided a new hobby for low prices. Much to my surprise, I haven’t “gone out” for a cocktail, or even a sit-down meal, this whole time.

As for the future, and getting organized: an undermentioned benefit of life here is indeed the high value placed on education. I can find dirt-cheap, adorable and/or decent school supplies for a fraction of what they’d cost in the U.S. So I did! I made my own physical planner out of a notebook from the school, and this helped me really see my goals, in a more tangible way than my budgeting app on my phone provides.

A major “aha” moment also came in looking again at my student loans, but this time, in parts, not just the whole. My resulting plan is a post for another time, but essentially, the $40K is divided into five parts. Realizing that made it easier to integrate that part of paying off my debt into the next 3-4 years.

I also gained some clarity about future plans, but this entry has gotten long enough. TL;DR: while I got more done in the first half of vacation, I did at least cook everyday and map out the rest of the year in a tangible way. I enjoyed reading voraciously and the rain falling on my roof at night, even as it proved depressing and kept me stowed away during the day. If nothing else, I now appreciate the idea of semi-retirement in a future world where I might work from home after saving up enough by, say, 45 to stop teaching, or to transition to another career. And all of this makes me grateful, even on the foggy days, for the gift of staying in place. 🙂

2 thoughts on “The Gift of Staying in Place”